Domestic and family violence comprises abusive, violent and intimidating behaviour in a relationship between partners, carers or family members. It is a learned behaviour, which is worsened by mental problems, anger and/or substance abuse.

Abuse isn’t only physical violence, as any behaviour to gain power or control over an intimate family member or spouse may also be considered abuse. Such behaviour could be in the form of verbal abuse: for example, swearing at or humiliating your partner, or perhaps attacking their body image, personality or intelligence. Psychological abuse might involve destroying property, abusing pets in front of family members, threatening to ‘out’ the person or telling your partner that no one would believe them. Emotional abuse could comprise blaming your loved one for problems in your relationship, weeks of silent treatment, emotional blackmail and comparing your loved one with others to undermine their self-worth.

The relationship between addiction and violence has been described as a “cause and consequence”, with a connection spanning many layers. Violence between partners in a relationship has been linked to heavy drug use – especially (but by no means limited to) alcohol and cocaine. This risk increases if you’re prone to burying angry feelings and drinking and/or taking drugs to the point of stupor.

Addiction takes its toll on relationships, causing financial burdens, job loss, mental health issues and medical conditions arising from drug use. The situation is further worsened when two addicts are in a relationship with each other. Domestic violence is common in such relationships. It could be sexual, physical, verbal – or all three in some cases – making it physically and psychologically damaging for both parties.

When is Domestic Violence a Hidden Face of Addiction?

Statistics for domestic violence all over the world are staggering: the World Health Organisation (WHO) reports that 30% of women who have been in a relationship state claim they have suffered some kind of physical and/or sexual abuse, while in 2016, 1.2 million women in the UK reported experiences of domestic abuse (of course, it’s important to note that men can also be the victims of such abuse). These figures are even more disturbing when you consider that most victims of domestic violence don’t speak out or report abuse.

In most cases of domestic violence, alcohol is involved – 50% of men accused of killing their spouses were drunk when they committed the crime – and abuse is more likely to occur (and be more violent), even when the victim is sober.

Domestic violence and substance abuse have some common features, such as loss of control; obsession with controlling the victim; tolerance of abuse (especially when violence erupts in frequency); and continuation of behaviour, despite knowing the consequences.

Over time, the loss of control tends to progress with less provocation and an increasing severity of violence. It is often marked by periods of remorse when the abuser swears to never attack the victim again. Violence and anger may then decrease for a while, but like addiction, the impulse usually returns and without proper treatment, the vicious cycle continues.

The elements of a successful relationship include:

When substance abuse enters the mix, it puts a strain on the relationship and all the fundamentals are cast aside. Your relationship with an addict will be jeopardised because s/he becomes preoccupied with acquiring the next dose and experiencing the euphoria of the related ‘high’, which may feel better than any component of the relationship. They may lie, and become violent, aggressive, hurtful, and/or absent, the joys of the relationship that brought you together are harder to find with each day that passes.

Substances such as alcohol, steroids, cocaine, ecstasy and methamphetamine are known to cause violence, anger and irritability. Living with an addict puts you at risk of physical and psychological torture.

Why Is Domestic Violence so Common in the Relationships of Addicts?

For many addicts, domestic violence is the continuation of the abuse cycle they’ve lived with their whole life. It doesn’t just spring up from thin air but is a learned behaviour, mostly from parental figures and an individual’s particular environment. Violence might also occur if you don’t seek help for substance abuse, from which you’ll learn to handle emotions and reactions to stressful situations.

Drugs can play a key role in the violence. Repeated use disrupts natural brain function and imbalances chemicals in the brain. Coupled with co-occurring disorders such as anxiety disorders, psychosis, paranoia and sleep disorders, this might result in violent behaviour.

Substance abuse and domestic violence are linked and often occur simultaneously. Irrespective of which comes first, each one aggravates the other’s effect. Substance abuse may be shared between victims and perpetrators. Drug abuse increases the chances of becoming abusive and the anguish of bearing such abuse may make the victim turn to alcohol and other substances to numb the pain or temporarily seek reprieve from the heavy burden of abuse.

The underlying cause of domestic violence is the desire of one partner to control the other. Other contributing factors include:

When domestic abuse begins, it’s sometimes difficult to determine if you’re headed down a turbulent or deadly road. Indicators of domestic abuse include:

Although individual cases may of course vary, men are typically considered to be the stronger sex where physical strength is concerned, and the significant majority of domestic violence cases involve attacks by men on women. An abused woman lives in a constant war zone, where she doesn’t know if the next words out of her mouth will trigger a violent reaction from her partner or spouse.

Violent men who abuse women may try to blame their actions on alcohol. Many women turn to alcohol or drugs to cope with the burden of repeated abuse. In some instances, they are forced into abusing alcohol or using drugs by their partner. Abused women might experience PTSD, panic disorder, anxiety disorder, and/or depression, and may entertain thoughts of – or even commit – suicide because of domestic abuse.

Women are not the only victims of domestic violence, as men also suffer abuse, but most don’t speak out. The signs often aren’t easy to identify but could be emotional, physical, sexual, as well as involving threats of abuse. This happens in both same-sex and heterosexual relationships.

As a man, you could be experiencing domestic abuse if your partner:

If you’re gay, your partner may:

Effects of Domestic Violence on Children

Domestic violence affects children – both those who witness violence and those who were abused by parental figures. It puts them at risk for psychiatric disorders, developmental problems, exhibiting aggressive behaviour, experiencing problems at school and having low self-esteem.

Children who grow up in an environment where domestic violence is common are more likely to experience emotional, physical and sexual abuse than those from stable homes. They also risk developing substance use disorder if they were victims of intimate partner violence from a parent or guardian.

It is common for abusers to use alcohol or drugs as an excuse for violence. They may claim remorse when sober, and/or say they can’t remember what they did whilst under the influence. However, there is no justification for domestic violence. If your partner refuses to seek help, it’s time to make an escape plan. If they do choose to seek help, the causes of domestic violence must be addressed during addiction treatment.

How to Get Help

If you or your loved one are showing signs of victim abuse or domestic violence, you need to take urgent action. You can get out of an abusive relationship, as it’s never too late to get help. There are many resources online to get you started, as well as shelters that offer full confidentiality to ensure your partner can’t find you. 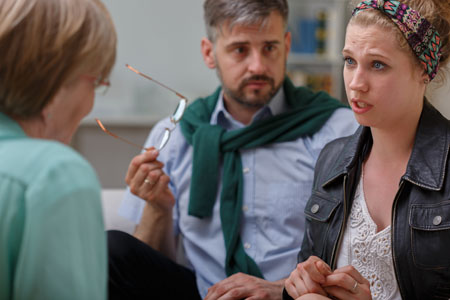 If you’re based in the UK, you can call the National Domestic Violence Helpline. It’s completely free, open 24/7 and is run in partnership with Refuge and the Women’s Aid. They provide support and information wherever you are in the UK and are staffed by fully trained volunteers and support workers. Their number is 0808 2000 247.

How to Get Out of an Abusive Relationship

There is a way out of an abusive relationship, even when you feel stuck. A few tips to help include:

How to Help a Domestic Violence Victim

Some of the best ways to help a victim of domestic violence include:

Best Recovery Programmes for Those Struggling with Addiction and Domestic Violence

The key to sobriety and gaining freedom from a destructive relationship is to find treatment for substance abuse and domestic violence. A rehab centre can help both the assailant and abused improve their quality of life and start the process of repairing the damage caused by addiction.

The root causes of addiction are diverse. It’s important that you seek dual diagnosis treatment if you’re a survivor of spousal abuse and suffering addiction at the same time.

You can ask for rehab centre referrals from family and friends who’ve dealt with similar issues or call an addiction helpline to speak with a counsellor, who can provide information about treatment options and the best rehab centres that are well equipped to handle your unique treatment needs.

How do I Ask for Help if I’m a Victim?

Is the Assailant Always the One who is an Alcohol or Drug Abuser?

Sometimes, one partner might have more issues with substance abuse than the other – or both might be addicts. In such relationships, domestic violence is common and often mutual between both aggressive parties.

What Substances other than Alcohol are Frequently Involved in Domestic Violence?

Any mind-altering substances can contribute to domestic abuse.

Are all Cases of Domestic Violence Defined by Women as Victims and Men as Perpetrators?

Not all domestic violence is perpetrated by men. While women in heterosexual relationships are more likely to experience domestic violence, they may also be prone to hitting their male partners. The difference is in the degree of assault and resulting injury. A man’s blow will typically do more damage than a woman’s unless she uses a weapon.

Does Substance Abuse Cause Domestic Violence?

Addiction unbalances brain chemical levels linked with emotions and feelings of anger, aggression and outbursts of physical violence. The risk of violence increases with intoxication if you usually bury your feelings when you’re sober. However, it’s important to note that substance abuse is not the only factor in domestic violence, as other factors such as growing up in a home or environment where abuse was normal can play a role.